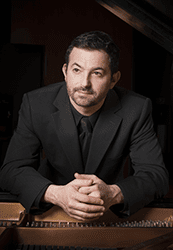 Dr. Benjamin Warsaw is a classical pianist, composer, teacher, and accompanist, and has performed numerous solo and ensemble concerts throughout North America.  Originally from the Atlanta area, Benjamin is also a JELF recipient.

A native of Atlanta, Georgia, Benjamin holds Bachelor and Master of Music degrees from the Eastman School of Music where he studied with Rebecca Penneys. He completed his Doctor of Musical Arts in Piano Performance at Boston University under the tutelage of the late Anthony di Bonaventura. He is a member of Pi Kappa Lambda, Music Teachers National Association, and the Savannah Music Teachers Association. Benjamin is Assistant Professor at Armstrong State University, Savannah, GA. There he teaches piano and theory and is Artistic Director of Piano in the Arts. In 2015 Benjamin released his debut album, Warsaw plays Warsaw, featuring a set of 24 Preludes of original music for piano.

JELF often hosts fun events and gatherings in different Jewish communities we serve. Check out our events page to stay in the loop.

This year, the generosity of donors just like you helped 296 students achieve their educational goals.